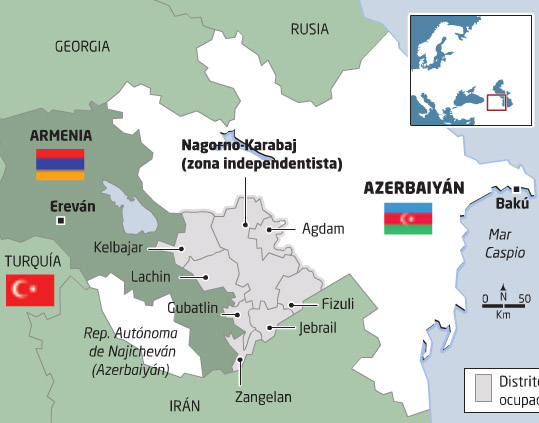 In line with the cease-fire agreement signed between the countries, Armenia, which previously evacuated Kalbajar and Aghdam, has to return Lachin to Azerbaijan until 12:00 a.m. local time (GMT2000).

It is also the last day for the Armenian population, who were illegally settled there, to leave the region.

On May 18, 1992, Armenian forces occupied Lachin after Khankendi and Shusha.

Relations between the former Soviet republics of Azerbaijan and Armenia have been tense since 1991 when the Armenian military occupied Nagorno-Karabakh, also known as Upper Karabakh, a territory recognized as part of Azerbaijan, and seven adjacent regions.

Baku liberated several cities and nearly 300 settlements and villages from the Armenian occupation during this time.

On Nov. 10, the two countries signed a Russia-brokered agreement to end fighting and work toward a comprehensive resolution.

While the truce is seen as a victory for Azerbaijan, and a defeat for Armenia, the latter’s armed forces left Aghdam on Nov. 20 and Kalbajar on Nov. 25 as part of the deal.

All Articles The Energy Post - January 20, 2021
0
U.S. President Donald Trump pardoned former chief strategist Steve Bannon as part of a flurry of clemency action in the final hours of his...

All Articles The Energy Post - January 20, 2021
0
French President Emmanuel Macron has no intention of issuing an official apology for France's exploitation and bloodshed in Algeria, the president's office said Wednesday,...