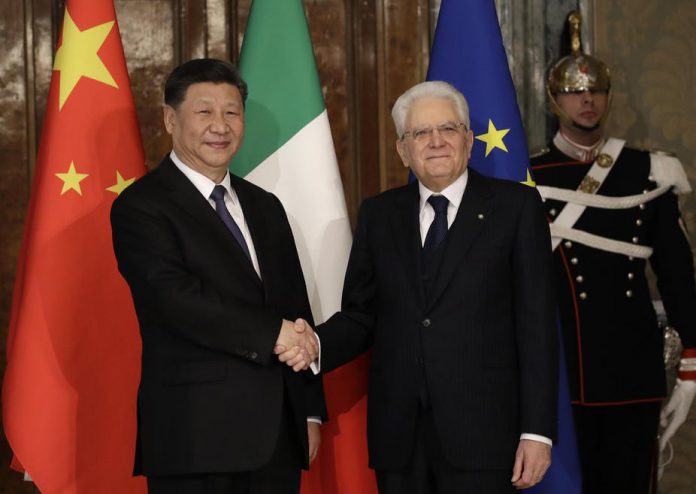 ROME, May 10 (Xinhua) — A conference entitled “Italy-China Partnership in the New Silk Road” was held Friday here, at which Italian government officials and experts voiced their support for the China-proposed Belt and Road Initiative (BRI), discussing the possibility of Italy becoming the BRI’s terminal in southern Europe.

Joining the BRI could be an opportunity to join a new global path of concrete multilateralism, said Manlio Di Stefano, Italian Undersecretary of State for Foreign Affairs and International Cooperation, at the conference.

“Italy is a natural terminal for the new Silk Road” despite strong pressure endured during negotiations to sign the Memorandum of Understanding (MoU) with China to join the BRI, he said.

Italy has the edge as the first G7 power to sign an MoU, although the edge will not last forever, said Di Stefano.

“The (Italian) government looks very kindly on the agreements inked with China. We have to stay the course,” added the undersecretary.

Among the experts attending the conference, Vladimiro Giacche, president of Italian think tank Centro Europa Ricerche (CER), said the BRI is the only project that aims to relaunch growth with real investment after the 2008 financial crisis.

According to an analysis conducted by the CER, the BRI could unleash the potential of international trade through reinforcing connectivity, said Giacche.

General Manager of COSCO Shipping Lines Italy Marco Donati believes that the BRI’s goal is not to colonize, because “the Chinese culture does not have the concept of colonization.”

According to Donati, BRI logistic improvements will benefit both countries and such a logistic edge will be fundamental for Italy to become competitive on the global stage, considering its export-centered economy.

“For COSCO, Italy is the second most important country in Europe, second only to Germany, and we are getting closer,” said Donati.

Closing the conference, Senator Vito Petrocelli, head of the Foreign Affairs Committee of the Senate, stressed the possible role that the BRI will play in helping Italy reduce its North-South development gap, enhancing people-to-people exchanges and promoting cooperation in third countries.

The presence of Italian Prime Minister Giuseppe Conte at the second Belt and Road Forum for International Cooperation in Beijing in April is evidence enough of Italy’s acknowledgement of the BRI, Petrocelli told Xinhua.

The event, organized by the Italian parliamentary group Unione Interparlamentare di Amicizia Italia-Cina, was also attended by Chinese Ambassador to Italy Li Ruiyu, who highlighted the need for both Italy and China to nurture the Belt and Road, expand infrastructure connectivity and create new channels for people-to-people exchanges.

Over the past six years, total trade between China and other countries participating in the BRI has exceeded 6 trillion dollars, and China’s investment in these countries has surpassed 80 billion dollars, with nearly 300,000 jobs created so far, according to official data.