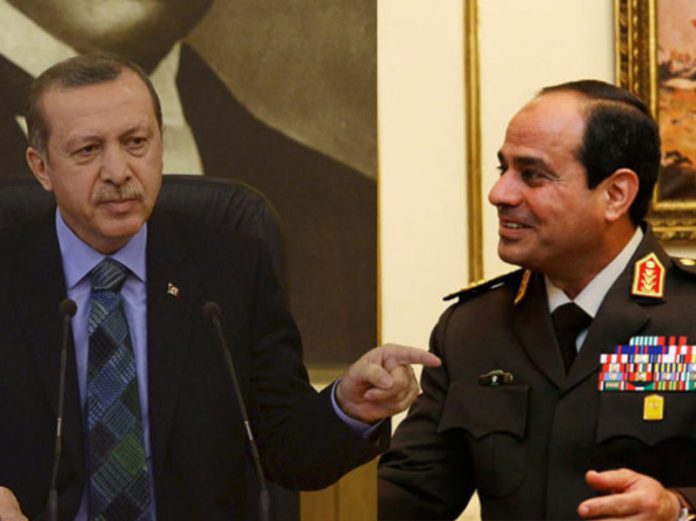 My statements on Turkey-Egypt relations in a recent interview in Arabic with www.araby21.com, a popular website in the Arab world, garnered such a response that it exceeded all my expectations. It was discussed on hundreds of Arabic websites and television channels.

My words were addressed to Egyptian Foreign Minister Sameh Shoukry during a press conference he held with Armenia’s foreign minister. He, in response, said, “Kind words are not enough, we need action.” However, in terms of action, he did not mention Turkey’s attitude and approach concerning Egypt (for example, how Turkey always states that it is against coups and questions the legitimacy of the putschist administration in Egypt), or other matters that we have become accustomed to hearing, such as Turkey opening its doors to Egyptian political asylum seekers and the allowance of their activities. Instead, he strangely talked about Turkey’s operations in Iraq, Syria, and Libya.

It appears that the problem between Turkey and Egypt is more than meets the eye. Let’s say that we comprehend the issue concerning Libya as it is Egypt’s neighbor and Cairo has its own agenda there. Turkey went to Libya upon the call of the legitimate Libyan government, and a new chapter was opened between Cairo and Ankara. Yet, why is Egypt, or rather the Abdel-Fattah el-Sisi administration so concerned about what Turkey is doing in Syria and Iraq?

Is it because they consider it meddling in Arab affairs? Honestly, is there any such differentiation here as Arab, Turk or Kurd? The Armenian foreign minister, who was with Shoukry at the time he made the statement in question, went off the deep end and said that they are against Turkey’s activities in the Mediterranean. What relevance does the Mediterranean have for Armenia? Though, even if it did have any relevance, it would make no difference, but that is another matter. Nonetheless, is it not strange enough that both Egyptian and Armenian foreign ministers are competing in this kerfuffle?

I said it during the interview as well: we strongly advise the Arab League to desist from playing the Arab card against Turkey. What the Arab League has done for Arabs and has not done for them is as clear as day. Every day hundreds of “Arabs” are emigrating to Turkey or other European countries from their homelands, which have been turned into purgatory by their disastrous administrations, oppressive and tyrannous regimes.

At least 4 million Syrians entered Turkey before Turkis troops were deployed to Syria. They did not go to any of the countries that make a spectacle in the name of the Arab League. Instead, they choose to migrate to non-Arab countries. Is this not enough to feel shame?

The United Arab Emirates (UAE), which does not even have 1 million Arabs among its population, can speak on behalf of Arabs; yet to say Turkey, which has assumed the responsibility of about 15 million Arabs, including Arabs who have Turkish citizenship, those from other Arab countries who have taken shelter in Turkey, and almost 6 million asylum seekers on the Turkish border in Syria, is meddling in the affairs of Arabs is complete insolence.

Meanwhile, what we are saying regarding relations with Egypt is, briefly: Consequent to its current dispute with Turkey, Egypt’s actions to harm Turkey are proving to be detrimental to nobody but itself. Out of our respect for the people of Egypt, its history, identity, the values it represents, we are presenting the trajectory of relations for the benefit of Egypt. Its alliance with Greece is clearly against Egypt’s interests. It cannot harm Turkey, because the deal it made holds no validity for Turkey.

Those who are ruling Egypt need not resort to such nonsensical acts because, in this manner, they are doing enormous harm to their own history, their own people and armies. It is obvious that they are not following their own policies. We are drawing attention to what Egypt is losing by being on an anti-Turkey axis as proxy for others. Otherwise, at present, the establishment of relations between Turkey and the Sisi regime will provide no benefit to Turkey, because, for instance, there is no active, reasonable, feasible economic atmosphere in Egypt anyway.

The state the Sisi administration has brought Egypt to is obvious. Corruption, pressure, bad administration, state intervention in every field, and the arbitrary enforcement of the law have destroyed a secure economic atmosphere. As the main priority in such coup administrations is the dictator’s safety and gain, the economic field will not be secure in any way. Hence, nobody will lose from the lack of or reduced relations with Egypt.

Despite this, the trajectory we remind them of is that the historical, geopolitical relations between the two countries necessitates different minimal relations. At this level, Egypt’s current axis is extremely erroneous, and with this, it is harming itself rather than Turkey. There is no need for this. Turkey has never taken an approach that would harm Egypt. All of Turkey’s disputes with Sisi remain, yet even this dispute is in the interest of Egypt, not against it.

Beyond all this, frankly, Egypt does not have the independence required to follow its own policies today. Therefore, it does not have the free will necessary to seek grounds for relations with Turkey that would be in its own interest. Hence, its politicians respond, in the name of the axis they represent, to even half-baked words they hear in this respect against Turkey, though it does not concern them at all.

Thus, what Turkey is doing in Iraq and Syria is of greater relevance and concern to that axis, and Egypt is bearing the brunt. There is really no need for this.

Young and non-white Britons likelier to lose jobs after furlough

All Articles The Energy Post - October 28, 2020
0
Exercise was held in North Arabian Sea amid escalating tensions with India. Pakistan Navy on Wednesday held an anti-ship missile firing drill in the North...

All Articles The Energy Post - October 28, 2020
0
LONDON (Reuters) - A COVID-19 vaccine could be rolled out in Britain for some people before Christmas but an early 2021 launch is more...

All Articles The Energy Post - October 28, 2020
0
A court in Istanbul on Tuesday sentenced Nazmi Mete Cantürk, a Turkish employee at the city's U.S. Consulate, to five years and two months...