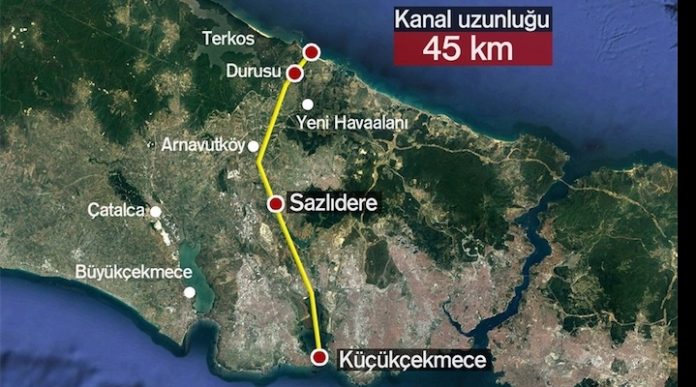 On Dec. 23, the Turkish Environment and Urbanization Ministry announced its final approval of the Environmental Impact Assessment for the Kanal Istanbul project. Now, it is the hottest topic in Turkey.

Strong polarization of opinions on the project has made Kanal Istanbul a political issue since it was first introduced by President Recep Tayyip Erdoğan. The opposition, in particular, has adopted an especially negative stance. Istanbul Mayor Ekrem İmamoğlu, a member of the main opposition Republican People’s Party (CHP), organized a press conference on Wednesday and said the project would “murder” Istanbul.

Is that so? Why are there opposing camps on this issue? Would Kanal Istanbul mean the death or the salvation of Istanbul?

I think the approach to the discussion is misguided. It actually is a technical matter, so nobody should automatically choose sides; in fact, there should not even be opposing sides in the discussion.

Istanbul is huge, and the city is growing whether we want it to or not.

When President Erdoğan announced this project in 2011 as a “crazy, megaproject,” many academics and researchers supported him. Actually very few stood against it at the time. It was a time when the country was not sinking into a dark polarization. Those were the good old days.

The project aims to create an artificial seaway between the Black Sea and the Marmara Sea to lessen the oil tanker traffic through the Bosporus, which sees heavy sea vessel traffic since the Montreux Convention gives tankers the right to free passage. Turkey earns almost nothing from the use, and the risk is huge. There have been several accidents on the Bosporus, with one just last year resulting in $100 million worth of damage to a historic waterfront mansion. In fact, between 1953 and 2003, 461 accidents occurred on the Bosporus.

Approximately 58,000 vessels pass through the Bosporus yearly. When the Montreux Convention was signed in the 1930s, the traffic was about 3,000 ships annually. Now, the huge number and size of the tankers pose a great risk for Istanbul.

Erdoğan wants to create an alternative to reduce the risk and make it possible to earn more domestic income. It is one of the country’s most strategic megaprojects.

The 45-kilometer canal, which will be built in Küçükçekmece-Durusu corridor, will be able to facilitate the passage of 160 vessels daily. The location offers a safer route in terms of water flow density. The construction will require at least a workforce of around 10,000. The project also promises benefits for the economy and will create employment opportunities.

So all these factors should be considered before standing firmly against the project.

I remember the 90s when people were protesting the third bridge on the Bosporus. They were saying that Istanbul doesn’t need a third bridge and that it will destroy the environment.

Well, history has proven that Istanbul obviously not only needed a third bridge but also a tunnel to connect Asia and Europe.

Likewise, in the 70s when the first bridge was about to be built, similar circles stood against it. Just try to imagine Istanbul without a bridge connecting its two sides. In the 1970s, left-wing figures and even one of the prominent politicians and former Prime Minister Bülent Ecevit stood against it. They said the Bosporus did not need a bridge, that the people could continue to cross it with ferries. History has proven their ultraconservative stances wrong. It was Ecevit who opened the first bridge as prime minister after his criticism as an opposition leader.

Progress is linear, and we can not stand against it. Kanal Istanbul is necessary and will make the city even more prosperous. However, of course, it must be built with the utmost consideration for its environmental impact. The construction should be minimal, and it should balance green areas with manmade structures.