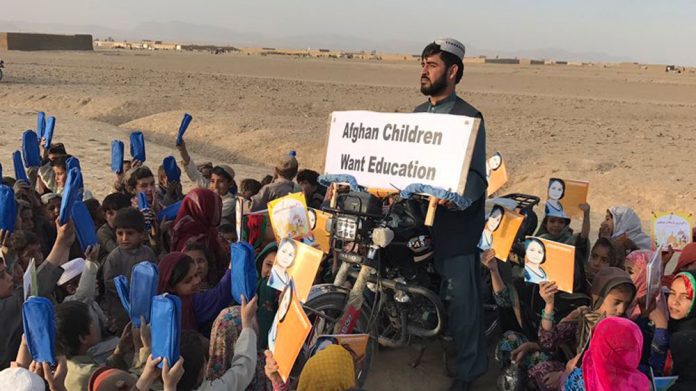 MAZAR-I-SHARIF, Afghanistan, Nov. 14 (Xinhua) — “Continued insurgency and security concerns have forced many parents to halt sending their children to school or doing so reluctantly and I’m one of those students,” muttered Malalai Muradi, 13, a middle school student in the northern city of Mazar-e-Sharif.

A grade seven student at the Mawlana Jalaludin Mohammad Balkhi School in Mazar-i-Sharif, the capital of the northern Balkh province, Muradi also lamented that a lack of classrooms and air pollution are two more hazardous factors which are undermining children’s education.

Mawlana Jalaludin Mohammad Balkhi School is one of the prestigious schools in Mazar-i-Sharif, the largest city in Afghanistan’s nine northern provinces. It accommodates more than 4,000 students in two morning and afternoon shifts.

“More than 4,000 students are getting an education at the Mawlana Jalaludin Mohammad Balkhi School in two shifts. The boys attend school in the morning and the girls in the afternoon,” an official of the school Saira Shamim told Xinhua recently.

However, she grumbled that the building of the school is too small to accommodate the students properly.

“The school compound is not big enough and there aren’t enough classrooms. Some students study under a few tents while about 30 classes are held in open,” Shamim complained.

She also complained that two classes are even held during snowy and rainy days, which is a matter of “sorrow” for both the students and school administrators.

Confirming the problem, an official of the Education Department of Balkh province said that more than 600,000 students with 45 percent of them being girls have been studying under such harsh conditions as some schools don’t have enough classrooms for the students.

“More than 600,000 students with 45 percent of them being girls are receiving an education in 540 schools across Balkh province, but unfortunately 20 percent of the pupils study under tents or in the open air,” observed Mohammad Hamayon Nabizada, the deputy administrator of the Provincial Education Department.

Nevertheless, Nabizada asserted that the provincial education department has been working hard to overcome the challenge and provide all facilities to the students in the relatively peaceful province but so far the situation remains a fiasco.

Expressing concern and describing the protracted war and persistent militancy in the country as a source of all the problems, Nabizada asserted that continued security incidents would deprive more children from getting an education.

“We don’t have textbooks, don’t have classrooms, don’t have a clean environment and can’t come to school free of fear due to a lack of security,” Muzhgan, a grade eight student, complained.

Dressed in a school uniform and wearing a mask over her nose, the excited girl muttered that the polluted air had forced her to wear a mask every day on her walk from home to school.

A car bomb in Afghanistan’s capital Kabul on Wednesday claimed the lives of 12 people including three school children, according to officials.

More than 3.7 million Afghan children, according to officials, cannot go school due to myriad reasons, but the most pressing being the security concerns in conflict-hit Afghanistan.