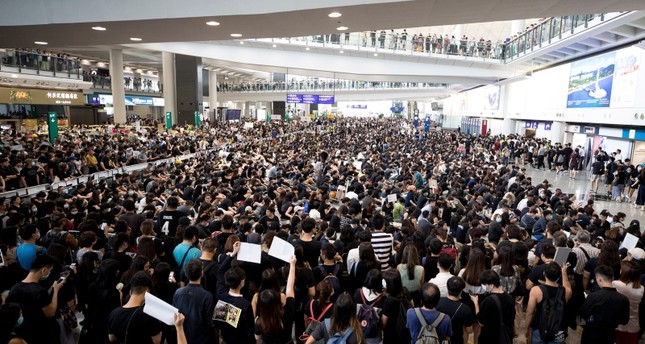 Hong Kong is set to enact an emergency law to ban face masks at rallies, local media reported yesterday, as authorities grapple with nearly four months of violent protests. Many demonstrators wear face masks to hide their identities and shield themselves from tear gas.

The 1922 Emergency Regulations Ordinance allows the chief executive to “make any regulations whatsoever which he [or she] may consider desirable in the public interest” in case of “emergency or public danger.” Invoking the emergency ordinance would allow the government to quickly enforce a ban on masks, which have been a primary means for protesters to hide their identity and avoid arrest.

The unrest, which began over opposition to a now-withdrawn extradition bill that would have allowed people to be sent to mainland China for trial, shows no sign of letting up. Demonstrators, angry over the shooting of an 18-year-old this week by police, clashed with police yesterday. Demonstrators threw petrol bombs and police responded with tear gas. Police have also urged the government to impose curfews to help curb the escalating violence in the city, where officers have become a target of protesters amid accusations of excessive use of force.

Over 269 protesters were arrested at protests coinciding with China’s National Day on Tuesday, marking the largest round of arrests within a single day since the movement began in June. The international finance hub has been left reeling from a shooting incident during the protests, marking the first time a demonstrator had been struck with a live round.